Pupil Player is the second tool you will use after Pupil Capture. It is a media and data visualizer at its core. You will use it to look at Pupil Capture recordings. Visualize your data and export it.

Don't have a recording yet? Download a sample recording.

The Player window is the main control center for Pupil Player. It displays video and data recorded by Pupil Capture or Pupil Invisible. 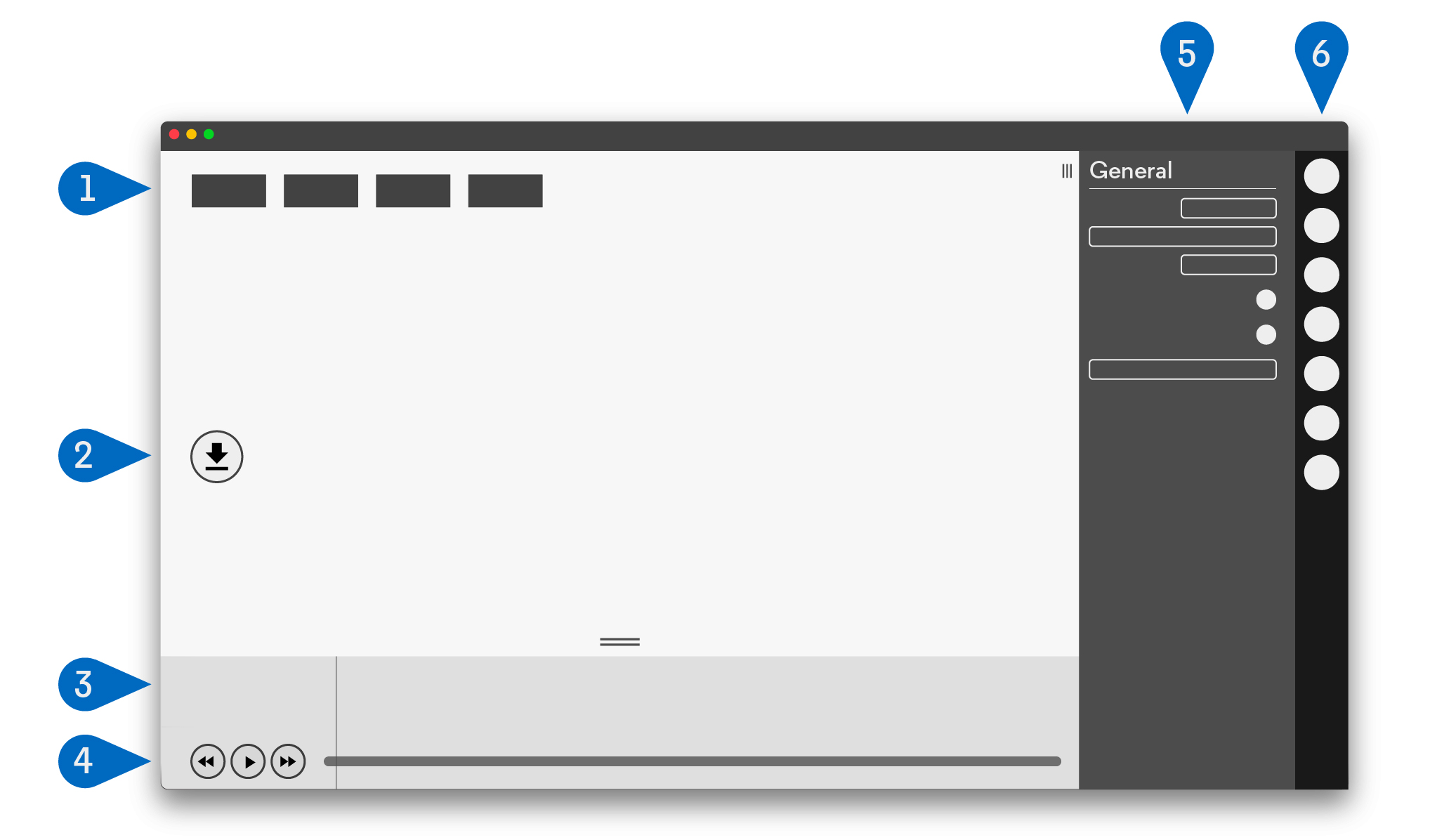 * While paused ** During playback

Pupil Player is similar to a video player. You can playback recordings and can load plugins to build visualizations.

Here is an example workflow:

Pupil Player will never remove or overwrite any of your raw data gathered during capture. All exports are isolated within a sub-directory named exports. Exports will never be overwritten.

Visualizations, marker tracking, and the exporter are all implemented using this structure. Very little work (often no work) needs to be done to make a Capture Plugin work for the Pupil Player and vice versa.

There are two general types of plugins:

In the following sections we provide a summary of plugins currently available and in Pupil Player.

We will call plugins with the Vis prefix visualization plugins. These plugins are simple plugins, are mostly additive (or not unique), and directly operate on the gaze positions to produce visualizations. Other plugins like Surface Tracker also produces visualizations, but will be discussed elsewhere due to the extent of its features.

Visualize the gaze positions with a circle for each gaze position. This plugin is not unique, therefore you can add multiple instances of the plugin to build your visualization. 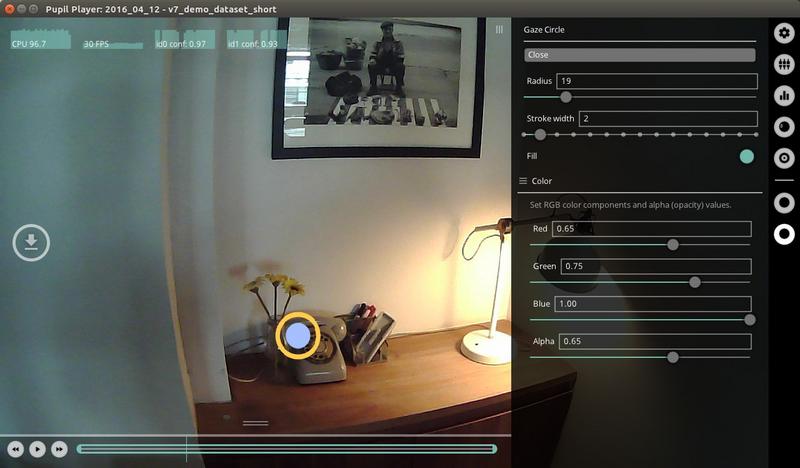 You can set the following parameters:

Visualize the gaze positions with a cross for each gaze position. This plugin is not unique, therefore you can add multiple instances of the plugin to build your visualization. You can set the following parameters: 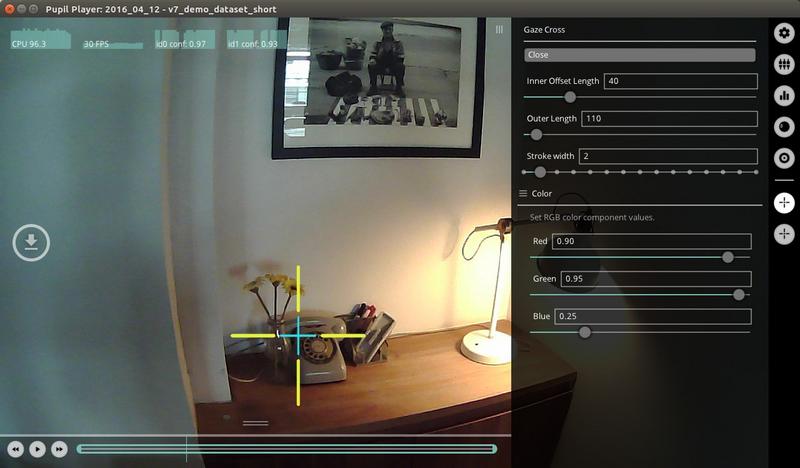 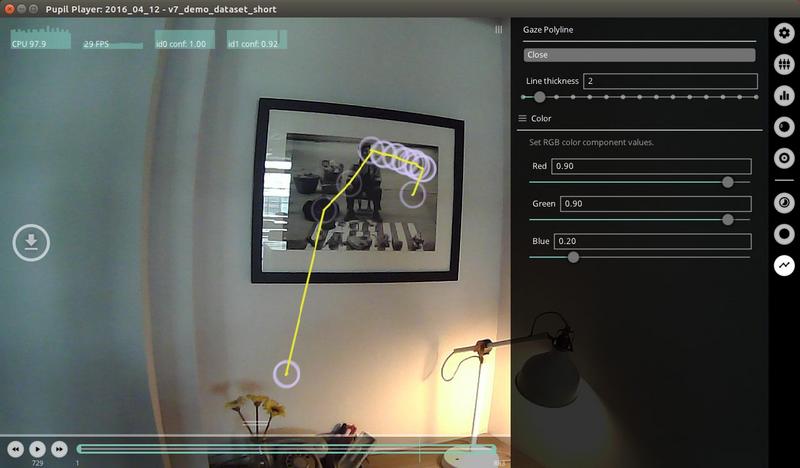 This plugin is not unique, therefore you can add multiple instances of the plugin to build your visualization. You can set the following parameters:

An example showing Vis Polyline used with Vis Circle. The polyline enables one to visualize the sequence of the gaze positions over a single world frame. 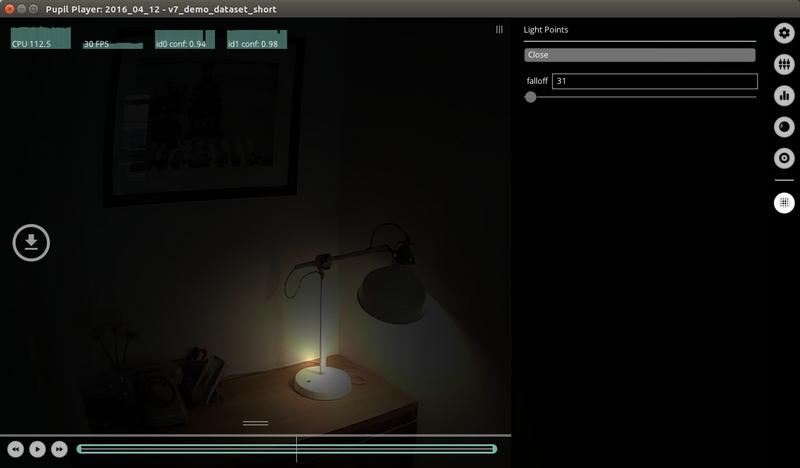 This plugin is not unique, therefore you can add multiple instances of the plugin to build your visualization. You can set the following parameters:

Here is an example demonstrating Vis Light Points with a falloff of 73.

Here is an example of the Eye Video Overlay with binocular eye videos. 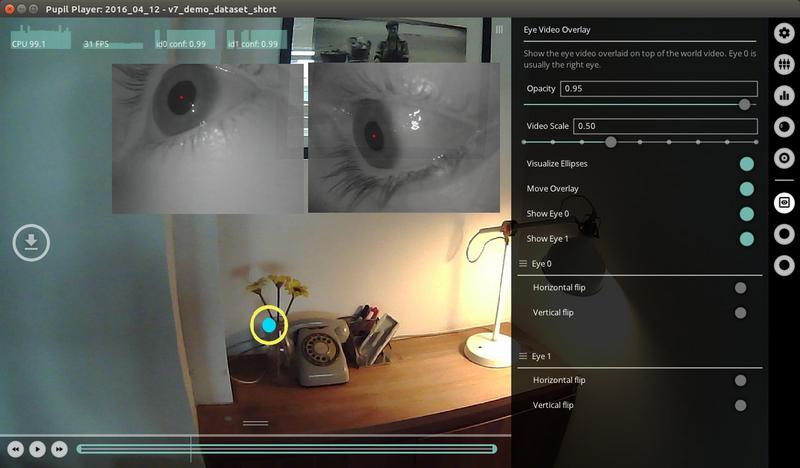 This plugin is unique, therefore you can only load one instance of this plugin. You can set the following parameters:

These plugins are simple unique plugins, that operate on the gaze data for analysis and visualizations.

This plugin is a post-hoc version of the Surface Tracking plugin for Pupil Capture. You can use this plugin to detect markers in the recording, define surfaces, edit surfaces, and create and export visualizations of gaze data within the defined surfaces. 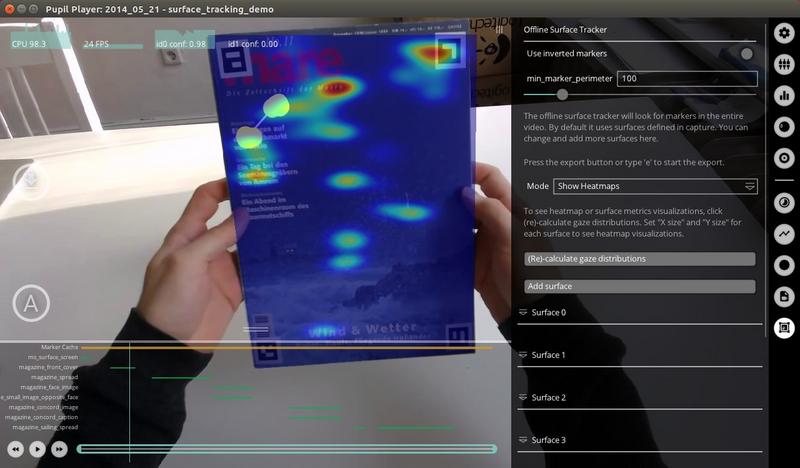 Here is an example workflow for using the Surface Tracker plugin to generate heatmap visualizations and export surface data reports:

All files generated by the Surface Tracker will be located in the subfolder surfaces. The different reported metrics are:

Further the following metrics are reported for every individual surface. Each surface has a name, which can be manually set as described above. This name is augmented by an automatically generated numerical identifier.

Additionally, the Surface Tracker exports the detected markers to the marker_detections.csv file. The world_index column represents the scene video frame index, marker_uid is the label used for identifying a single marker, and corner_<0|1|2|3>_<x|y> is the corner coordinate in pixel space.

The post-hoc fixation detector calculates fixations for the whole recording. The menu gives feedback about the progress of the detection, how many fixations were found, and shows detailed information about the current fixation. Press f or click the f hot key button on the left hand side of the window to seek forward to the next fixation. 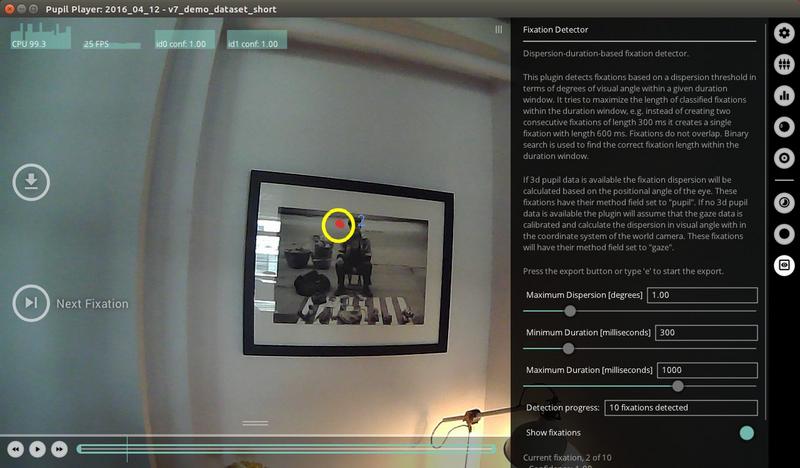 Toggle Show fixations to show a visualization of fixations. The blue number is the number of the fixation (0 being the first fixation). You can export fixation reports for your current trim section by pressing e on your keyboard or the e hot key button on the left hand side of the window.

You can find more information in our dedicated fixation detection section.

This plugin uses fiducial markers (apriltag) to build a 3d model of the environment and track the headset's pose within it. Note, only markers of the default tag36h11 family are currently supported by the head pose tracker plugin.

The markers used must be unique. You may not use multiple instances of the same marker ID within your environment.

See the surface tracking section for images of the markers to download.

Head pose tracking works best in a well lit environment with an even distribution of light, so that the tracking markers are clearly visible. Try to avoid situations where the world-camera faces into bright light, such as sunlight entering through a window in an otherwise dim room

Results are exported in the following files:

This plugin visualizes accelerometer and gyroscope data from Pupil Invisible recordings. It also fuses the data using Madgwick's algorithm to yield drift-free orientation estimates in the pitch and roll axes. 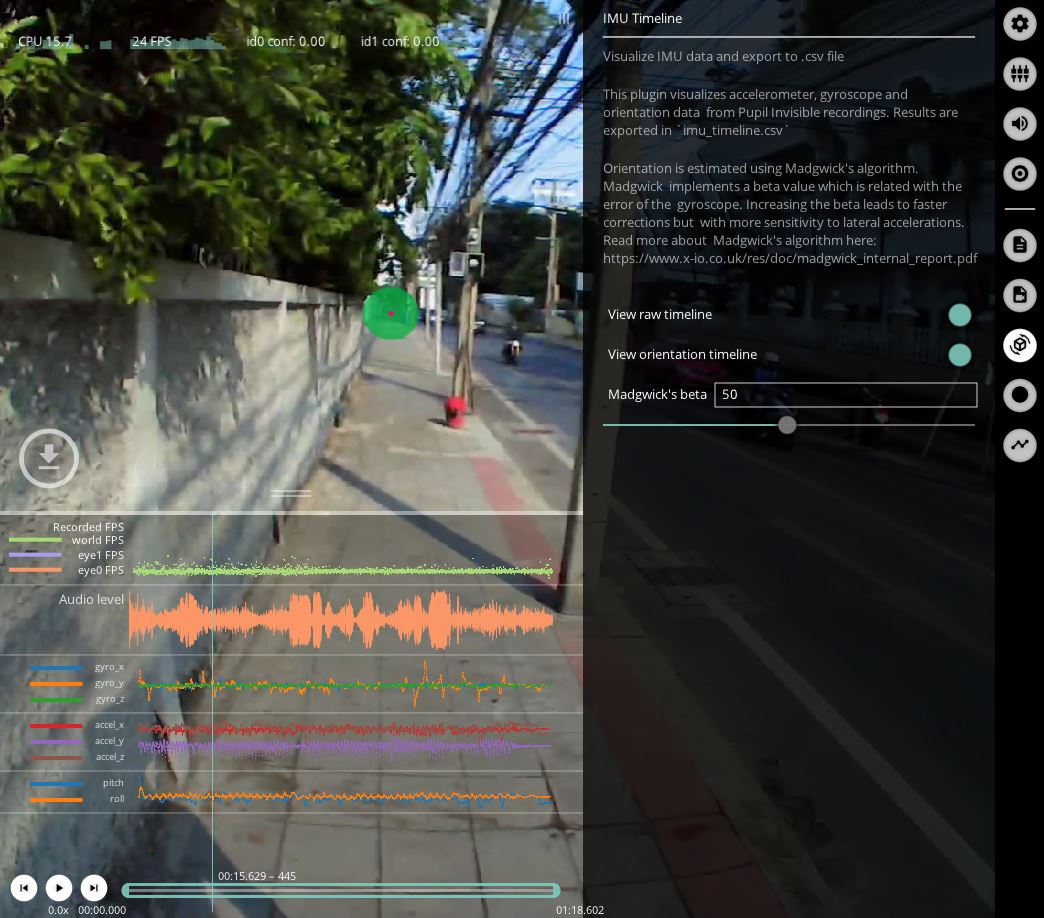 In the Plugin's menu, toggle View raw timeline to view the accelerometer and gyroscope readings and View orientation timeline for pitch and roll. You can also change Madgwick's beta. This value is associated with gyroscope mean error. Increasing the beta will lead to faster drift corrections but with more sensitivity to lateral accelerations. Read more about Madgwick's algorithm here.

Results are exported in imu_timeline.csv with the following columns:

This Plugin does not estimate orientation about the yaw axis (head rotation from left to right). This is because the IMU has no magnetometer to monitor heading. The Plugin therefore implements a version of Madgwick's algorithm that only estimates Pitch and Roll.

Note that this Plugin will not be loaded with Pupil Core recordings.

By default, Player starts with the Pupil Data From Recording plugin that tries to load pupil positions that were detected and stored during a Pupil Capture recording. Alternatively, one can run the pupil detection post-hoc.

Post-hoc Calibration For Another Recording

The Post-hoc Pupil Detection plugin can be used with any dataset where eye videos were recorded. The plugin tries to load the eye videos, and runs the pupil detection algorithm in separate processes.

This plugin is available starting with Pupil Player v0.9.13.

The Redetect button restarts the detection procedure. You can use the Post-hoc Pupil Detection plugin to debug, improve, and gain insight into the pupil detection process.

By default, Player starts with the Gaze Data From Recording plugin that tries to load gaze positions that were detected and stored during a Pupil Capture recording. Alternatively, one can run the gaze mapping process post-hoc.

The Post-hoc Gaze Calibration plugin enables you to calibrate, map, and validate gaze post-hoc and is available starting with Pupil Player v0.9.13. It can be used on any Pupil dataset.

The workflow is separated into three steps, each with its own submenu: Reference Locations, Calibrations, and Gaze Mappers.

Reference locations are points within the recorded world video that are known to have been fixated on by the participant/subject. They can either be automatically detected or manually annotated:

As in Capture, one can have more than one calibration per recording. A calibration on its own does not result in gaze data. Rather, it contains the required parameters to map pupil to gaze data. Each has the following properties:

Calibrations are stored as plcal files in the recording's calibration subfolder. You can copy and apply them to recordings that do not include reference locations. See the instructional video below for details.

In order to apply a calibration to pupil data, one needs a gaze mapper. Each gaze mapper has the following properties:

Overlapping mapping ranges result in multiple gaze points per gaze datum. This can be temporarly disabled by turning off the according gaze mapper's Activate Gaze option.

You can compare 2d and 3d mapping results by creating two calibrations and gaze mappers with the same calibration and mapping ranges.

# Developing your own Plugin

To develop your own plugin see the developer guide.

Some plugins in Pupil Player only load if they are able to be used with the product that created the recordings.

Here is a list of what plugins are available based on the product that generated the recording:

You can export data and videos by pressing e on your keyboard or the e hot key button in the Pupil Player window.

All open plugins that have export capability will export when you press e. Exports are separated from your raw data and contained in the exports sub-directory. The exports directory lives within your recording directory.

Active video exporters will run in the background and you can see the progress bar of the export in the GUI. While exporting, you can continue working with Pupil Player and even launch new exports. Each video export creates at least one mp4 and its respective file timestamp file. See the Data Format section for details.

Every export creates a new folder within the exports sub-directory of your recording. All data from the export is saved to this folder.

You can select the frame range to export by setting trim marks in the seek bar or directly in the General Settings menu.

Longer running exports, e.g. video exports, go through three phases: Queued, Running, and Completed. Export tasks can be cancelled while being queued or running. Completed tasks are kept in the list for reference.

The World Video Exporter is loaded by default. 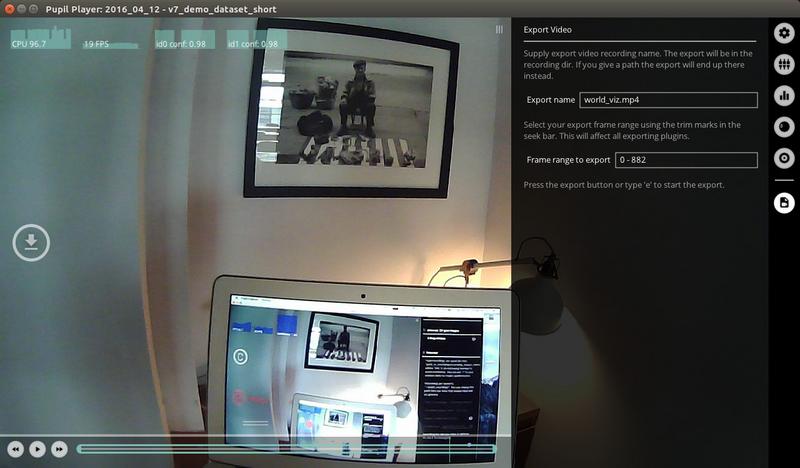 The export saves the world video as shown in Player, including all currently active visualizations (see the Visualization Plugins section).

The Eye Video Exporter needs to be loaded explicitly through the Plugin Manager. It includes the option to render the 2d pupil detection result into the exported video.

The iMotions Exporter creates data that can be used with https://imotions.com/.

Specifically, it undistorts the world video images using the camera intrinsics. Gaze data is also undistorted and exported to the gaze.tlv file.

The Raw Data Exporter exports pupil and gaze data to .csv files and is active by default. 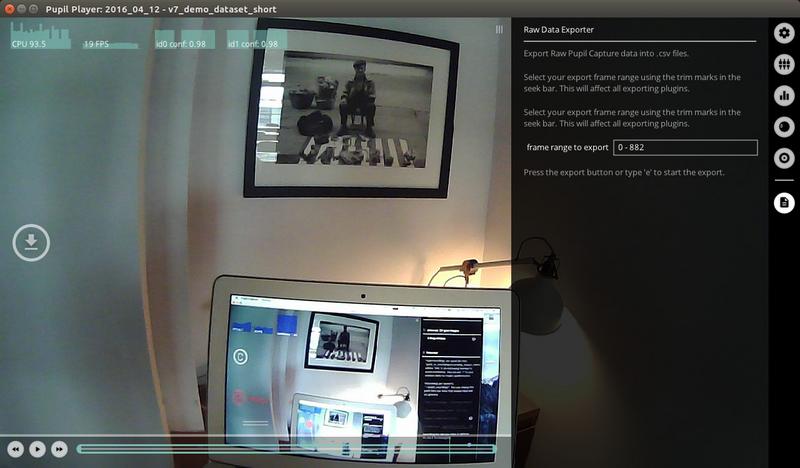 The fields below are not available for Pupil Invisible recordings:

The Annotation Player plugin loads any annotations generated during the recording, as well as allows you to add annotations after the effect in Pupil Player. On export, the plugin writes the annotation data to annotations.csv. It includes at least the following keys:

Any custom field encountered in the annotations will be exported as an additional column. Their values will be converted to strings using Python's string representation. Therefore, it is recommended to use primitive types (strings, integers, floats) as value types for custom fields.

Fixations are exported to fixations.csv, containing the following fields: